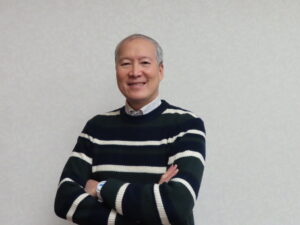 Lawrence M. Liao is associate professor at the Graduate School of Integrated Sciences for Life at Hiroshima University since 2008, where he teaches general biosphere science courses and conducts practical workshops on the use of English in science communications.  He received a Bachelor of Science in marine biology from the University of San Carlos in Cebu City and a Master of Science in marine biology from the Marine Science Institute of the University of the Philippines under a scholarship grant of the Philippine Council for Aquatic and Marine Research and Development.  He was awarded a Doctor of Philosophy in biology, with major in seaweed biology by the University of North Carolina at Chapel Hill.  He also spent a year at the National Museum of Natural History in Washington, D.C. to conduct research on the seaweeds of Cuyo Islands, Palawan under a Smithsonian Institution educational outreach fellowship grant.

His research interests cover a broad area of seaweed biology from taxonomy and systematics to cultivation ecology and environmental bioremediation which resulted in over 50 research papers published in peer-reviewed journals.  He is a member of the International Phycological Society, the Japanese Society of Phycology, the Society for Coastal Ecosystems-Asia Pacific and was formerly president of the Philippine Association of Marine Science and past President of the Association of Systematic Biologists of the Philippines.  For more than ten years, he was Editor of The Philippine Scientist, an open access and peer-refereed journal devoted to the natural sciences.  He is currently Editor in Chief of the Philippine Journal of Systematic Biology and sits on the editorial board of a number of journals in the Philippines and elsewhere.

In 2005, he received the Most Outstanding Alumnus award in Marine Science given by the University of San Carlos.  Hiroshima University recognized him with the Excellent Educator Award in 2016.